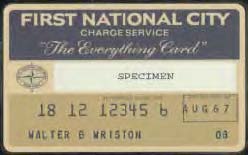 In celebration of Citigroup's 200th Anniversary, we are sharing stories from our rich history here on this blog. The 26th installation below covers how the credit card business revolutionized banking. Read the 25th installment explaining how business focus shifted to retail banking and how the ATM impacted the consumer experience, here.

Growth is delivered by the credit-card business, offering an alternative to the traditional "bricks-and-mortar" banking model

According to John Reed, the origins of the credit card business lay in the need to make a line of credit available to consumers efficiently. Citi already had a personal-loan department, but the overheads were high with consequently high interest charges. Unlike in Britain, overdraft banking was not allowed in the United States. Hence, the invention of the Everything Card in the early 1960s.

The Everything Card was accepted only in New York. At the time, a national card was still unknown. When John Reed was running the consumer business in the 1970s, his colleague Dave Phillips pointed out that, since the card relationship was already based on contacts by phone and mail, there was no reason why it should not be extended outside the area where the bank had branches. Reed explained, "So we decided to start a direct mail campaign around the country to get customers. By then credit bureaus had come into being, as well as credit scoring, and so we had the ability to get a credit check on people prior to mailing them a card. Within a year and a half we were the biggest direct mail people in the country." The rest of the banking industry protested vigorously. "They said it's not fair to poach customers from out of your geography," Reed recalled. "I spent about a year pacifying bankers whose customers we had taken, but we developed a nationwide card business."

To address the challenges of granting credit, Citibank drew on the expertise of companies such as Ford Motor Credit, GMAC, and General Foods. For instance, Richard Braddock, a former brand manager at General Foods, was recruited in 1973. He went on to become Citicorp's president and chief operating officer.

A blend of techniques - credit scoring supplemented by effective marketing - took Citi into the intensive use of branding and advertising, in a style not traditionally associated with the banking industry. In the words of Steven Freiberg, who was later head of the global credit-card business, "Now, more than 30 years on, it doesn't sound extraordinary. But back in those days the reaction was, 'You did what?!'"

By 1994, Citibank had become the world's largest issuer of bank and charge cards with almost 50 million cards active - 34 million in the United States, nine million in other countries, and almost seven million Diners Club cards. Citibank was also issuing five million private-label cards for department stores and other retail outlets.

In North America and Europe, the company consolidated the card businesses under a single team, which ran 15 processing and customer service facilities. It was the second-largest card issuer in Belgium and Greece.

In Asia, cards were Citibank's fastest-growing business, with three million cards in force, making it the largest issuer in the region. In addition to being dominant in almost every Asian market where it operated, the bank was also the exclusive credit-card partner for the region's biggest frequent-flyer program, encompassing seven airlines.

The number of cards was also growing in Latin America, where Citibank was approaching the top market share position in several markets.