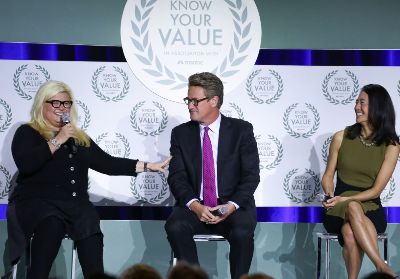 As part of our work to engage progress makers, this year Citi is partnering with Know Your Value, a program with NBCUniversal News Group and Mika Brzezinski, to explore how female aspiring leaders can get their worth at work and create the lives they want. Mei Lin Kwan-Gett, Citi’s Head of Global Litigation, participated in the “Closing the Deal” panel at the Know Your Value event in Chicago. Below she answers a few questions.

What have you found surprising or unexpected about your current role as Global Head of Litigation at Citi?

One of the most surprising things is the sheer variety in my day-to-day job. I came from working at a law firm, where I represented dozens of clients who were involved in wide range of industries, to working here, where I have just one client: Citi. You would think that shrinking from multiple clients to one would have translated into a much narrower work experience, but it sure doesn’t feel that way.

This is partly due to the breadth of Citi’s business and global footprint, which means the lawsuits and investigations we handle are incredibly diverse. Of course, we see our share of the types of cases you’d expect for a financial services firm – involving trading, brokerage services, credit cards, mortgages, and the like – but we also see a lot of cases involving more esoteric subjects, such as political corruption, power plants, metals stored in Chinese ports, hazardous waste sites, skyscraper construction, and impersonations of dead lawyers (and that’s just this week!). Also, there’s a lot of cross-pollination within and outside of Citi, and I feel that the knowledge and exposure I am gaining about other disciplines and functions is making me a better lawyer, a better decision-maker, and a better professional.

What is your greatest piece of advice for young professionals?

My primary advice is to maintain your credibility. When I was a trial lawyer, the need for a lawyer to maintain his or her credibility was painfully evident. It was absolutely crucial that the judge and the jury trust you. If you lost your credibility before them, then you were sunk. Not surprisingly, the same holds true for negotiations. If you aren’t credible, your bargaining position is so weak that the playing field becomes markedly uneven.

However, the question of how to maintain your credibility is a lot more involved than simply telling the truth. I’ve come up with three things to work on:

(2) calibrate your argument to your audience, and

(3) speak with conviction. This last point, in particular, is something that comes up again and again in Know Your Value discussions, often framed as speaking with confidence. Some people are better at bluffing than others, but most of us really have to believe in what we’re saying in order to sound like we mean it. And, in the negotiation context, I think it’s important to understand that to speak with conviction you need to believe that your position is the right one – not necessarily the winning one, but the right one. So you should do whatever it takes to get yourself to that mindset, which could mean gathering more data, conducting more analysis, developing better arguments, soliciting additional feedback, and/or rehearsing your presentation.

Tell us about a “Know Your Value” moment in your career.

Early in my tenure at a law firm, I was the junior partner on a huge case that had five or six partners on it. Our client – the General Counsel of a global health care company – had asked us to draft a memo to go to the company’s Board of Directors. When the General Counsel received our first draft, he thought it was not sufficiently hard-hitting and asked us to revise it. I revised the memo accordingly, and the General Counsel absolutely hated it. He was quite vocal about it (picture an irate client at high volume), and said that whoever had written the memo should be fired. He was an extremely important client to the firm. The other partners on the case, who had approved the memo before we sent it to the client, were not overly concerned, but I was a wreck.

The key and most senior partner offered to talk to the client for me. But, after some thought, I realized I didn’t want – or need – the key partner to do my talking for me. I took it upon myself to speak to the General Counsel directly. I think he was rather surprised, but I said, “I want to explain to you why I revised the memo the way I did.” And I described how, with each change, I thought I was following his directions to a T. My sense was that this was a very rare occurrence, having one of his outside attorneys recount his own statements back to him. It was a fascinating conversation, because he then started asking me my views on all sorts of things happening at his company. We definitely gained a much better understanding of one another. Long story short, after that, the General Counsel often solicited my views directly and made it clear that he was glad that I was representing him.

If you could create a TED talk, what would the name be of your talk?

When I think about people who impress or people who inspire, I often think that one characteristic that they all share is good judgment. Wouldn’t it be nice to know how to hone your judgment? What if there was a cooncrete way to do that? I would love to know! Maybe one day I will, and then I could deliver a talk with a title such as:

The makings of good judgment: instinct, experience, ethics, and perspective.