The better-than-expected jobs report released earlier this month by the Department of Labor provided a glimmer of hope amid the economic hardship that COVID-19 has inflicted on small business. Many Americans and many American small businesses are still struggling to weather this storm, but the jobs report suggests that the extraordinary response to this pandemic that includes the U.S. Small Business Administration's Paycheck Protection Program (PPP) has helped to provide a lifeline and fuel a partial bounce back of jobs in a number of sectors.

Although Citi is a smaller small business lender than some of our peers, from the launch of this program we've been committed to punching well above our weight to help small businesses that are struggling to stay afloat. And the data shows, we are succeeding.

To date, Citi has funded more than $3.5 billion in PPP loans to more than 29,000 small businesses across the country that collectively employ more than 300,000 people. These loans, along with more than 4.5 million loans disbursed by thousands of our fellow lenders, have helped small businesses – the backbone of our economy – retain or rehire employees that may have lost their jobs in this crisis as economic activity slowed to contain the health crisis.

Consider the top five industries that Citi's PPP loans supported, based on employee count at those loan recipients, illustrated in the graphic below. These industries represent the contact-intensive areas of our economy that were most affected by the economic shutdown, such as non-COVID-related healthcare, hotels and restaurants, and lawyers' and accountants' offices. 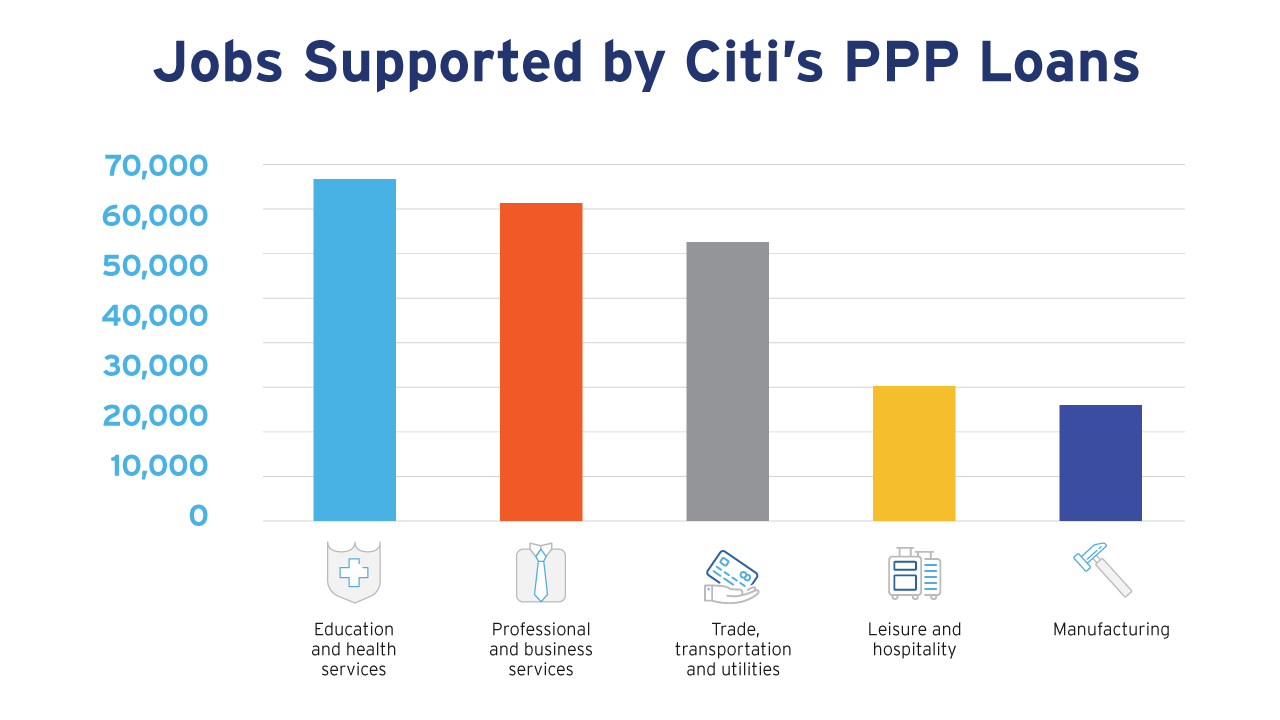 As you can see in the chart below, these five sectors all experienced a significant job loss from March to April and a modest but meaningful turnaround from April to May as PPP loans were distributed and states started to gradually re-open their economies. They are still nowhere near the employment levels they were before the pandemic, but the hope is the forgivable loans they received can serve as a bridge to the other side of this crisis. As we described in a previous blog post, Citi's PPP loans have been concentrated in the markets where we have a branch footprint, including a high volume of loans in California, Florida, Illinois and New York. The BLS State Employment and Unemployment Summary released last week confirmed that these were also some of the states suffering most from the economic fallout over the last few months. California's unemployment rate nearly tripled, from 5.5 percent in March to 16.4 percent in April as did Florida's rate, which increased from 4.4 percent to 13.8 percent in the same timeframe. Illinois saw its rate jump even more from 4.2 percent to 17.2 percent. In our home state of New York where the health impact was particularly devastating, especially in New York City, the jobs report showed that the New York economy took a significant hit as well, with the unemployment rate increasing from 4.1 percent to 15.3 percent.

Fortunately, the BLS State Employment and Unemployment Summary released last week showed the unemployment rate in these states, like the national number, seems to be headed in the right direction as well. One major driver in the improving rate is the hospitality and leisure sector, which was the top sector for jobs lost in April in California, Florida, Illinois and New York but started to show a rebound in jobs in May. This sector was among the top five sectors supported, in terms of employee count, by Citi's PPP loans in each of these states.

In fact, the graphics below show that Citi's top sectors served, again based on total number of employees at the businesses that received loans, mirrored the hardest-hit sectors in the states where we funded the most loans. For California and New York we show the number of jobs supported by Citi's loans and the percentage change in total employees in each sector from March to April based on the BLS State Employment and Unemployment Summary. The correlation between where we made loans and the hardest-hit sectors occurred across each state where we had a significant number of PPP loans. 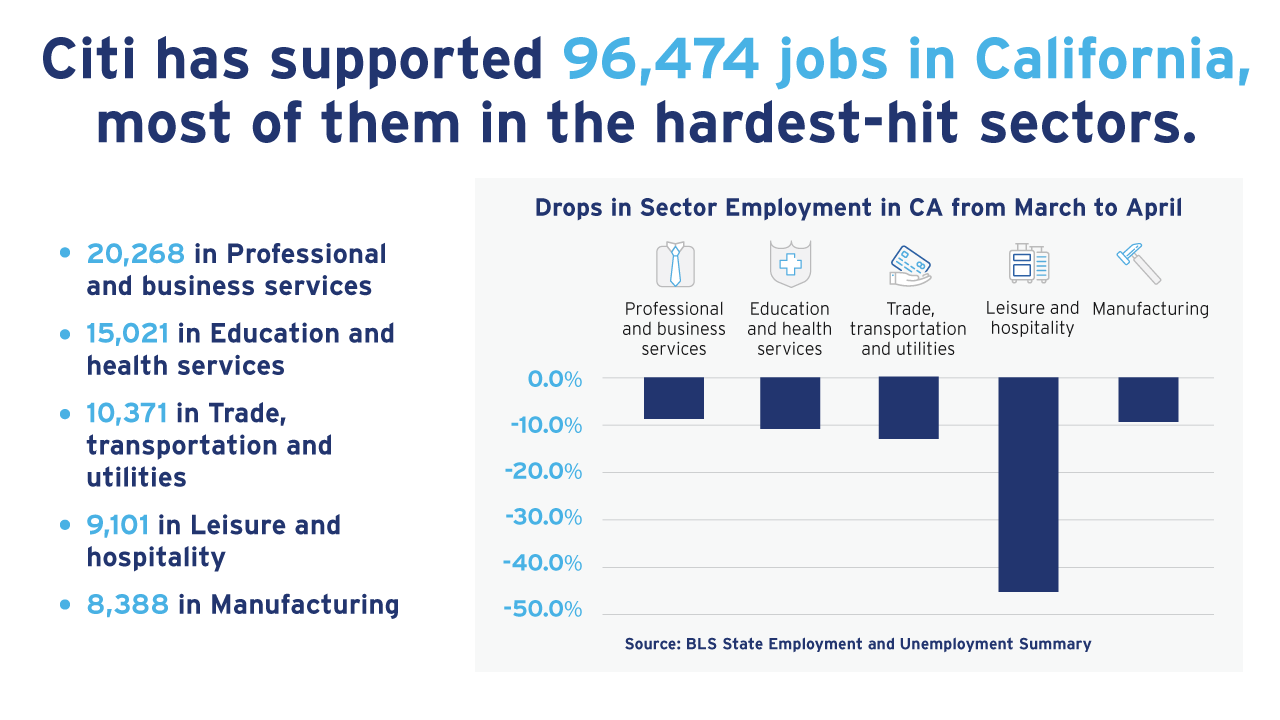 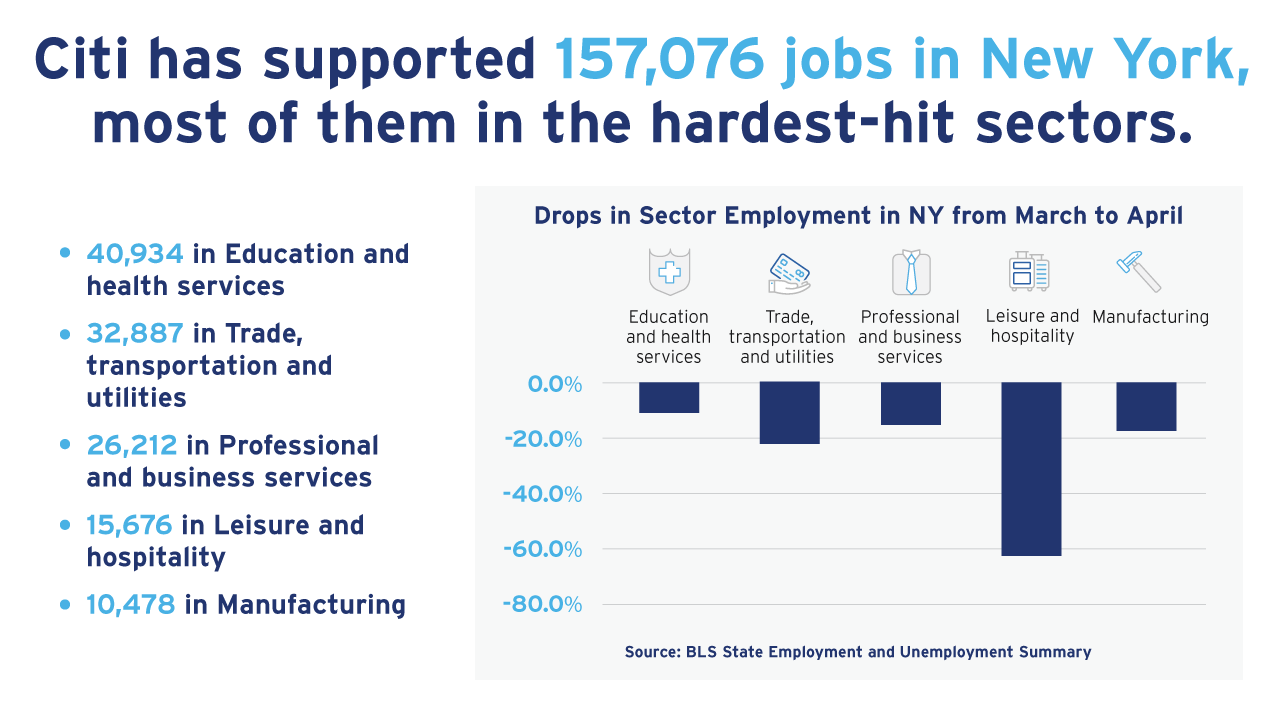